This is a traditional news story written by yours truly.

All the students stared at the teacher when she walked into the classroom. Right when she started talking, the faces of the students beamed.

Bonnie Noonan has been working at Xavier University of Louisiana for 12 years and has made sure she connects, pushes and encourages her students every day.

Even though Noonan is a white women who works at a historically black university she doesn’t allow her skin color to affect her teaching.

“At first it felt strange because I never realized I was white,” Noonan said.

For Noonan, it has been an eye – opener working at Xavier. She  grew up surrounded by white people, who according to Noonan think they hold a privileged  place in society. When she decided to teach at Xavier, Noonan she was nervous faculty and students would look at her differently.

Although it has been a great experience for Noonan, she ran into some obstacles in the beginning.

“I use to pronounce the names incorrectly and students would be really upset with that,” she said.“I realized how important names are in the African American community.”

Noonan also noticed that her freshman students seemed disappointed when she first walked in. “They’re coming to an HBCU and here’s another white teacher and I would tell them ‘I’m white and I’m sorry,” she said.

“But now I have this representation of being a really nice teacher, who’s open to everybody and they are glad to have me.”

Noonan also thinks that there should be more diversity among faculty. “Xavier should have more African American professors. It’s important for students to see themselves in front of the classroom,” she said.

Andrew Klimas, who has been teaching at Xavier for seven years in the Math department understood he had to do more than a black professor.

“I didn’t even know HBCUs existed until doing research looking for jobs,” he said.

Prior to Xavier, Klimas worked at many schools which were all predominately white institutions. Being at Xavier, he suspected his students would have a harder time connecting to him because of the generational gap but not his color.

“It’s probably hard for them to relate to a middle- aged white man and likewise,” he said “I don’t know about their lives and what they have gone through.”

Klimas has done his research about African American history, but he also pays attention to overlooked aspects of black culture.

“It could be as simple as paying more attention to movies and books,” he said.

Another professor, Shayna Blum, head of the Art department, has noticed there is no unity in New Orleans. Blum moved to the city from Connecticut.

“First off, the city is completely divided you have different sections of the white area, here’s the African American area and that’s not something I really experienced, “she said.

Since Xavier is Blum’s first historically black school teaching experience, she fell in love the students.

“I do like being at a Catholic institution an environment that has that type of spiritual practice,” Blum said.“In terms of Xavier being an HBCU of serving and helping the African American population, I’m happy to serve any population.”

Even though white professors may have to overcome the racial divide, they still want to stay at Xavier and share their expertise. “It’s one thing about going to a place but you don’t have to stay…interacting with the students is hands down the best part of my working day,” Klimas said. 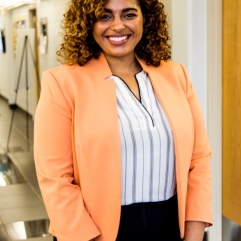